When designing the new Shack at this QTH, I knew that the overall perimeter would come out at just over 22m – Perfect for a full-wave horizontal loop for 20m.  I originally planned for it to be a quick ‘n’ dirty “lurk” tool for when I had bits of the Shack complete so that I could have a tune around HF and listen to broadcast radio.  A loop was not an aerial that I had much experience with, so with the space available at the new digs to experiment- I thought I’d write some words of wisdom, too…

Of course, it wasn’t going to be single-bander, it’s fed with 300-ohm ladder-line and, not being too far above the roof of the Shack, means that the total feed length is around 4.5m – This comes in through a dedicated pipe fitting and through a 1:1 Choke (8-turns of RG58 on an FT240-43) before the “ANT2” socket of my MFJ ATU.  Support-wise, any non-conductive material will suffice: PVC tube or even a few lengths of suitable timber.

As a single-bander, a loop presents at around 100-ohms and there are a couple of options to get it “paired” with your 50-ohm radio: a 2:1 Current Balun or a 1/4-wavelength 75-ohm piece of coax as a matching “stub” (such as TV-aerial coax).  There are numerous articles elsewhere on the internets if you wish to go down this road – but, as a multiband solution, balanced feeder is the way to go.  The loop can be as big as you need it and if you can get a 40m (or 80m) loop at your QTH, then at around 15-30ft it’d be a very effective cloud-warmer for NVIS.

This 14MHz-30MHz loop is therefore not meant to be a “DX” antenna – although it performs remarkably well in that regard.  It’s simply a low-profile way of putting out (and receiving) a decent signal on the higher bands as well as being pretty forgiving in high-noise areas.

This plan view gives you an idea of how simple the aerial is from above: 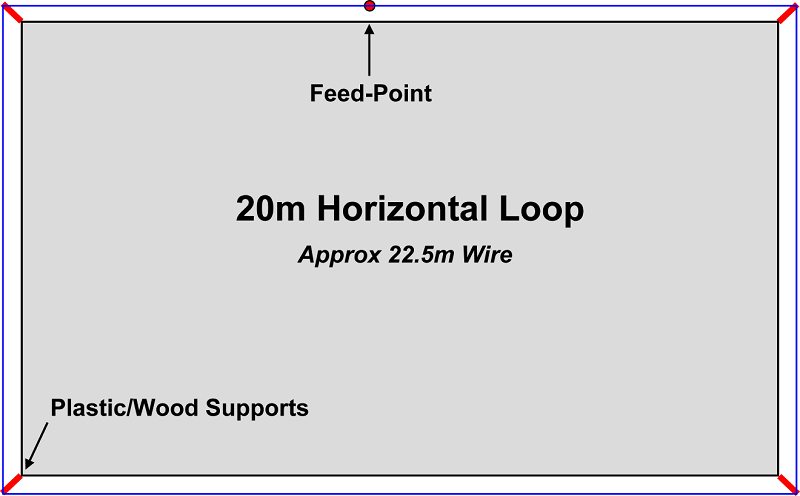 At the moment, it’s about 75cm above the roof of my Shack threaded through some temporary 2×1 bits of timber and initial tests are encouraging when A/B’ing against the 80m Doublet.  Predictably, the Doublet wins on 160m, 80m and 40m all the time but the occasional signal on 30m is stronger on the loop.  I tend to use DDK9 as a reference on this band when there’s a lack of CW activity.

On 20m through 10m it really pulls the signals in – and during some recent 10m openings, the band seemed dead on the 80m Doublet but when switching to the loop: Signals magically appeared.   Listening to the NCDXF Beacons at around 1500UTC (in early May) on 20m showed that the CS and OH transmissions were just audible on the Doublet, but S3 and very clear on the loop. 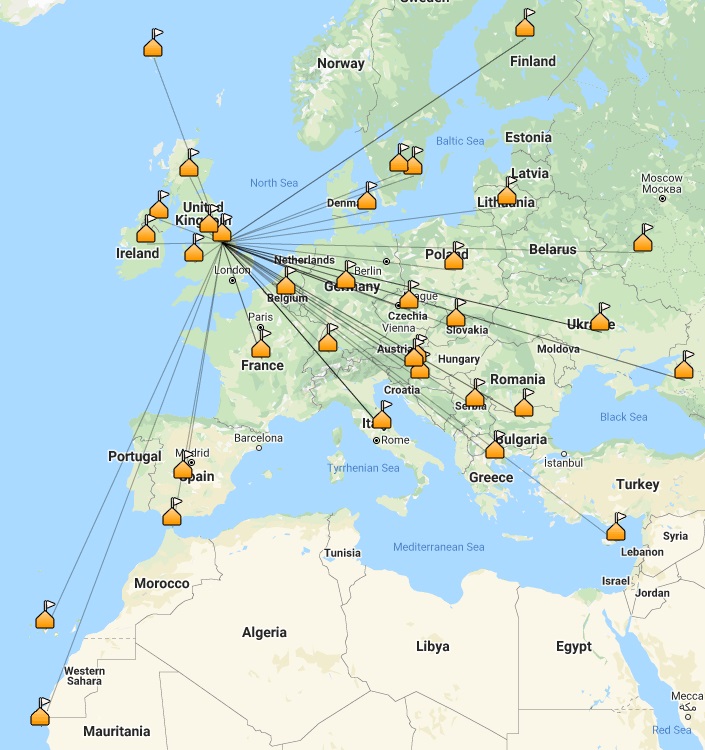 During CQ WW WPX CW weekend, I plugged the RTL SDR into the TS-590SG and took the following snapshot of 10m activity on the Sunday morning.  You can see a good number of CW signals plus the FT8 rabble on 28.074.  Also visible is a “ghost” signal slightly above it – the RTL is good at those. 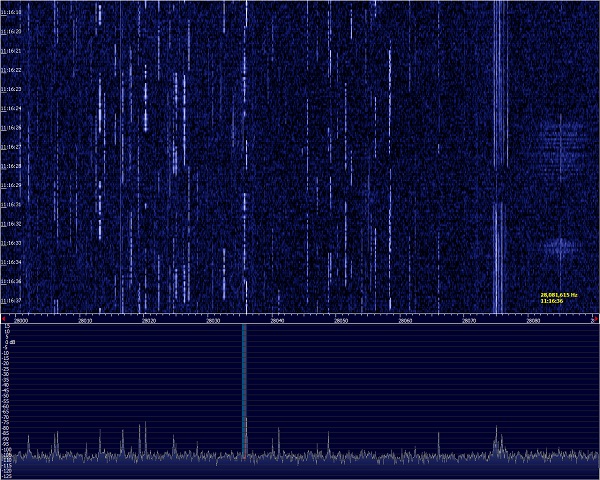 My aim for the home QTH is to have 2 main HF aerials:  A long Doublet for <10MHz and something shorter+higher for the “fun” bands – perhaps a simple fan dipole.   One benefit of the loop is that it doesn’t cause much visual QRM, so it can stay up as a reference aerial alongside whatever else I put in the air.  The garden is long enough to hold an Inverted-L for Top Band – perhaps one for later in the year when the nights draw in?!