Baluns (and UnUns) are not complicated devices once you know the basics.  Sure, they can be tricky to build as they generally require the dexterity of 3 hands when winding+holding everything in place… In my original experiments, I wanted to learn a bit more about Baluns, UnUns and how best (ie: effectively and cheaply) to address common-mode current issues to ensure that the aerials+feeder perform as they should.  In short, I didn’t want to spend £30 on another off-the-shelf box that, perhaps, didn’t do the exact job I wanted it to do – I’d rather spend the money on specific parts in order to build baluns that are suited to my own requirements.

Firstly: There is no such thing as a Balum – Unless the “um” is you wondering just what they are, when/where to use them and what it needs to made from.

Firstly, when and where would you use a Balun or UnUn?

Why Not Just Buy Them?
You could just visit your local radio emporium (or online dealer) and buy something off-the-shelf.  But, building your own equipment has always been part of the Ham Radio hobby and does offer several advantages:

Shown here is a £37 box of tricks from LDG – It’s a simple 1:1 Balun used with a resonant dipole (or G5RV coax>ladder-line join).

About £10 worth of bits.  LDG say that it’s rated for 200w PEP – Sounds about right.  I’m not a fan this (bifilar) method of winding and prefer the coax option, especially with a resonant dipole.  Connect a 1:1: bifilar balun up to an analyzer (along with a 50ohm load), sweep it from 1.8MHz to 30MHz and you’ll see why…  The color of the toroid also concerns me – it looks like an iron core (less than ideal for the intended purpose).

Ah, this example is why I hate buying “black boxes” – This is a Moonraker/Watson model.  There appears to be enamel copper wire wrapped around a short ferrite rod and then sealed with potting compound.  Just as well because the box is plastic with no real waterproofing properties.

I’ll wager that the potting compound is the most expensive part of this balun which happens to be rated at 400w – Without knowing what’s inside the compound, it’s hard to say for sure whether it’ll withstand a thrashing a full UK power – When looking at power-ratings, you must factor in the aerial being used as ratings are (usually) shown for ideal conditions, ie: 1:1 SWR.  Overall, these devices work just fine under what I’d call normal conditions – that’s with a 100w radio on SSB and the odd burst of high-power data modes.

If you do buy from a Ham outlet, and it’s not clear what’s inside the box: Ask.  If they can’t/won’t tell you, or reply “that would be telling”, then treat their product as a Completely Valueless Object.

Size vs Capacity
The main issue when you start building baluns with significant “head-room” is they tend to get heavy.  Adequate strain-relief for the wires is needed and possibly a centre-support if it’s a 160m-40m dipole.  A top-mounted eye-bolt for use with a pulley may help – That’s a good reason to use good quality enclosures and to cover any holes/connections with potting compound – It may be a messy job and the stuff takes 24hrs to cure, but it can make all the difference.

When using reputable (and adequately rated) components – you can understand why people like GWhip charge around £50 their products.  If you only ever want to run QRP or your licence does not permit more than 100w, you can build simple baluns for very little cost…

For serious choking of problematic cables, I suggest a 31-mix snap-on ferrite – G4ZTR Aerial Parts of Colchester has sizes from RG58 to RG213.  These offer a better performance than the “domestic” generic/TDK versions.  The larger “Problem-Solver” can be useful in taming noisy mains cables.

For my Portable operating – particularly when using a frequency-agile Doublet, I made this 1:1 Choke from a PL259, some RG58, an FT240-31 ferrite toroid and this Dipole Centre.  It’s good practice to have a Balun where BAL(anced) meets UN(balanced) feeder and this serves nicely.  The PL259 plugs into a radio or ATU and the balanced feeder attaches to the M4 bolts on the yellow centre.  This also saves using a boxed version which introduces another PL259/SO239 combo – the RG58 coax is kept deliberately short as this is, essentially, balanced line to the Shack. 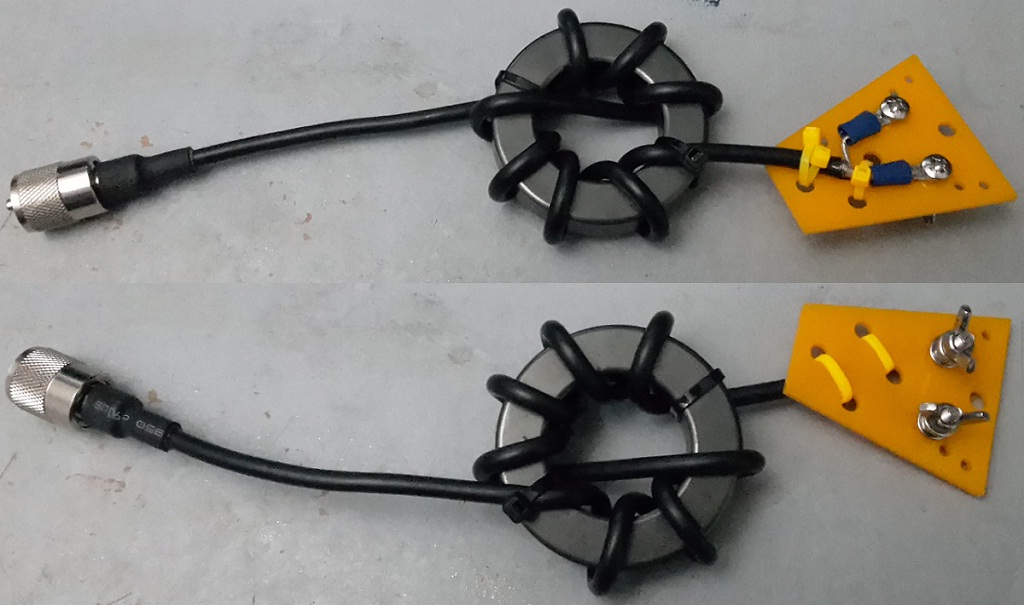 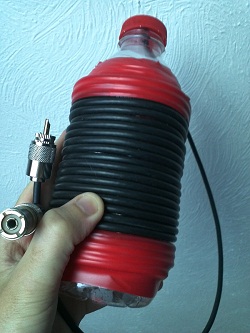 Bottle Choke, aka: Ugly Choke/Balun
The Bottle Choke is simple-to-make and you can find countless example online – However, after tests, I don’t like them very much.

This type of choking is not advised as the choke will most likely be  reactive and rather than be an effective “choke”, what you actually get is a parallel resonant circuit.  In fact, under the right/wrong conditions, these types of choke can actually increase the common-mode current.  I strongly advise the use of a good toroid-based choke, especially if used below 10MHz.

On the right, you can see my “bottle choke” made from a plastic water bottle and length of RG58.  In the past I have used it at the base of my HF vertical (40m+30m) but it’s now stored under the desk as an example of how not to reduce common-mode current!