Being able to pilfer from the Ham Goodies stock can be rather convenient at times – especially when it comes to wiring-up a new Shack and deciding that a “proper” in-line mains filter should be in evidence.  GM3SEK calls these ferrites a “game changer”, so why not jump on the “Clean Shack” bandwagon?!

Making use of the well-proven 31-mix Problem-Solver snap-on ferrite core, I followed the excellent article by Adrian M0NWK after having made use of a quick “wrap-around-bodge” on an extension lead in the old PZT Shack which fed my 50-amp switch-mode PSU.  On this there were 2 cores each with 3 turns of the mains flex and I noticed a fair drop in noise on the lower HF bands (eg: 160m, 80m and 40m).

Below is the revised version which was made from stripped 2.5mm twin+earth (around 75cm length) and you’ll notice that I had to cut 2 lengths in order to get a 3rd insulated conductor (the neutral/blue serving as the earth). 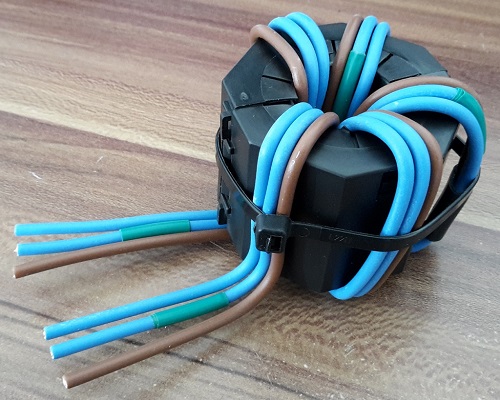 During tests, I learnt quite a bit from my various appliances and what I has assumed to be “clean” devices.  In the diagram below, I was able to see noise from my laptop’s PSU when plugged into the socket to the left of the filter but not when in the same socket as the radio’s PSU.

I therefore assumed that the mains wiring was being used as an aerial – so decided to fit another filter straight after the consumer unit.  The diagram below is simplified somewhat: There are actually 5 more sockets (and about 4m of wiring) between the 2 filters.  As I originally said in a previous draft of this page: “Half of the fun is the experimentation” 🙂

Using the same approach in the house would be impractical, so the next job is to switch everything off and then power them up one-by-one until I identify a problem device.  I can then try a small “domestic” snap-on ferrite before considering a 31-mix of a suitable size.  Experimentation along with trial’n’error really are key here – all houses (and neighbours) are different.

A few terminal-blocks allow for simple connection to the mains feed.  The usual caveats about mains voltage and licking live terminals should be applied here – I am not a Doctor.   Like most “chokes” (and baluns), it can be a bit fiddly to wind but is otherwise a simple project until you get to the mains supply so refer to your “How to Ham for Dummies” guide for what to do when you’re out of your comfort zone. 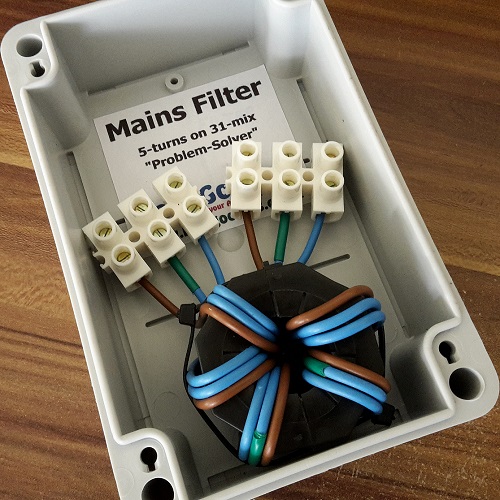 The Science Bit – have a look at M0NWK’s article for a comparison of “before and after” waterfall images from his IC-7300 based on his location/QRM situation.

The Update
Since writing this original article, I’ve installed the filter in the Shack and made some comparisons between battery, mains and mains with this filter – the honest conclusion is that I appear to have such a good RF location that there is very little difference, even on 80m which (humble brag) is exceedingly quiet here.  To give you a visual example, the following screenshot (no pre-amp, +10dB REF) of Top Band is where the filter had the greatest effect (and yes, I know it’s not much):

Across HF, this is a considerable improvement on my old QTH which required a setting of 0dB on the waterfall REF.  When I operate /P, it typically goes up to +17dB which means that although my QTH is more than ideal – it’s still not quite the level of “sitting in a field, running on a battery”.

On the Kenwood, where I’m more used to the S-meter on a home setup, I’ve not seen a reading like this since I forgot to plug the aerial in: 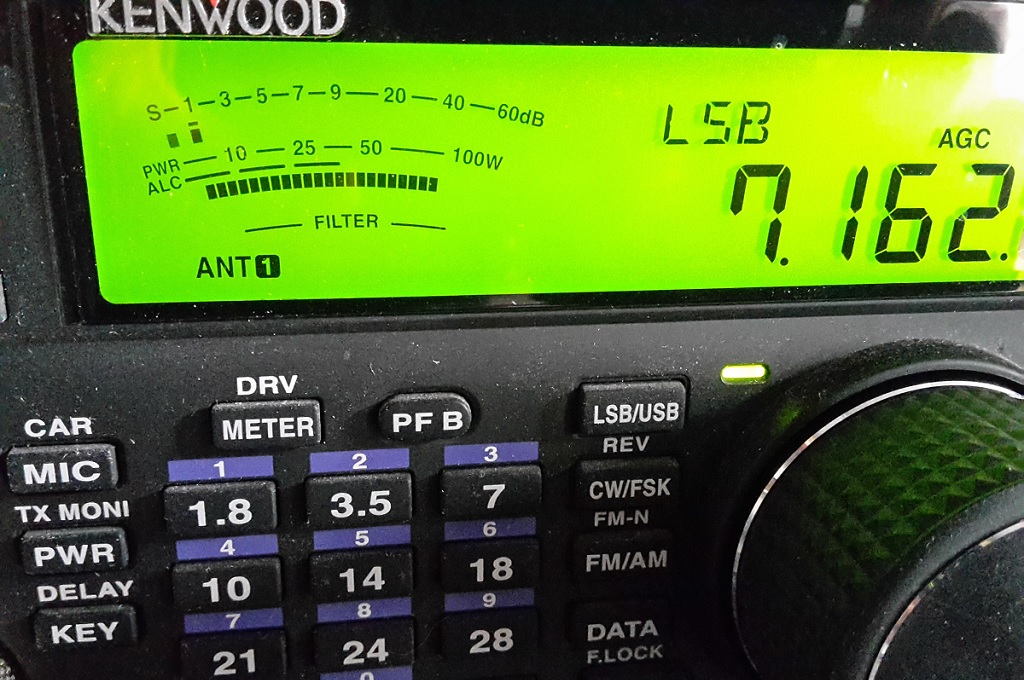 As the saying goes, it’s all about location, location, location.  At my previous QTH, I “enjoyed” a 40m noisefloor of around S5-6 and that was with the original choke mentioned above.  The wonders of SDR radios and waterfalls make experiments like this quite educational – and often depressing when you can “see” all kinds of QRM that you’re not in a position to do much about.

Update 2: Since the “lockdown” and most people being stuck at home – a significant increase in SM-PSU “hash”, burps, gurgles and splutters have been observed on 80m, 40m and 20m.  The only real comfort is I know that my own house/Shack is in order!

Update 3: Following some recently observed “piffle” on a couple of online groups/forums regarding these chokes I really should state the bleedin’ obvious that no amount of choking/filtering will remove noise received by your radio via the aerial when it’s being radiated in open space.  In the same way a lump of ferrite on your coax won’t filter-out the guy (or gal) running 1kW on 20m – the choke is designed to prevent (or at least significantly reduce) common-mode nasties “hitching a ride” on the outer skin of your coax’ braid and/or electrical cabling (thus preventing it from acting as an aerial).

The same applies to running the Shack off a battery – if there are things in the house still running, there’s a chance they’ll be using the house wiring to radiate, so isolate the whole house before testing.  You may not be able to cure everything, but satisfactory results can be achieved with a little time, patience plus trial ‘n’ error. 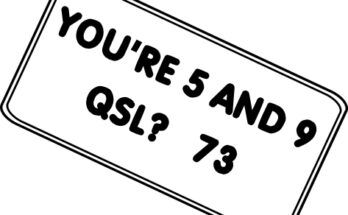 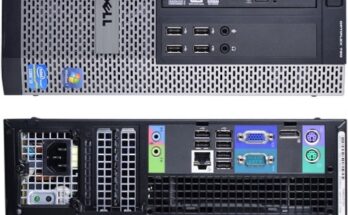 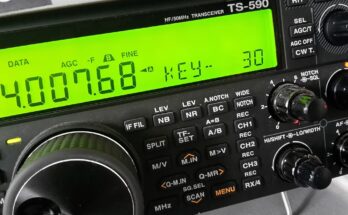