I’ve had the Kenwood TS-590SG since April 2016 but, until recently, never tried using the Remote CAT/VoIP software.  This allows you to control the radio as well as send/receive audio as if you were “in the Shack”.  Previously, if I wanted to operate the Shack radio from the house, I relied on using a remote-desktop program to access the Shack PC and use PZTLog to just run digimodes using the in-built PSK/RTTY engine.

The Icom IC-7300, which I also have, offers a similar system to Kenwood – although I’ve found that their software, when switching between the VFOs (there are 3 per band), tends to bugger them up.  I tried to think of a technical way of explaining that, but failed.  It seems to put the VFO freq somewhere else to where I left it.  I use my 3 VFOs thus: CW, Data, SSB.  It works perfectly on the Kenwood – but the Icom, not so much.

So, let’s stick with the Kenwood because it’s a great radio for remote operation – whether 20ft away or 200 miles.  My needs are simple: I simply want to use the radio elsewhere in the house on my LAN.  For that, there are 2 programs on each computer for this to work:

I’ll skim over the exact configuration steps as these programs are well documented and fairly easy to work-out without too much effort.  Obviously you need to know the IP Address or Hostname of the computer in the Shack (found under System Properties in Windoze).  Your internet router may also have the IP Address listed as a “connected device”.  If you plan to expose your radio to the internet, you’ll need to open the CAT+Audio ports via your router and direct them to the Shack PC.

On the Shack PC, the ARHP-590G is a CAT>Network utility which allows for remote connections to control the transceiver via its COM port.  Here’s what it looks like when a connection is present:

The audio is handled via the ARVP-10H software – and I’m currently connected from the house to it: 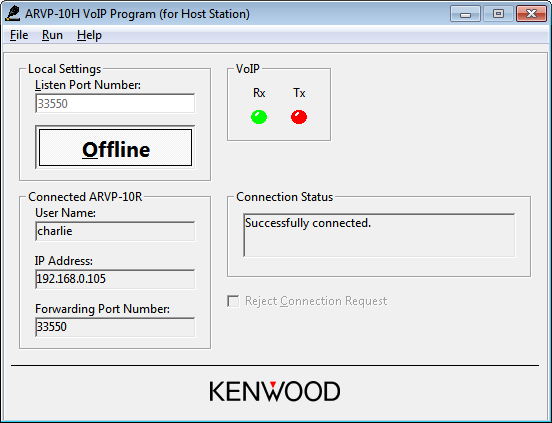 On the remote PC, you’ll use the normal ARCP-590G CAT software but define a “Network” connection rather than a Serial Port one.  Once you’ve added the “Network” profile – you can connect to it as it were on a local serial port: 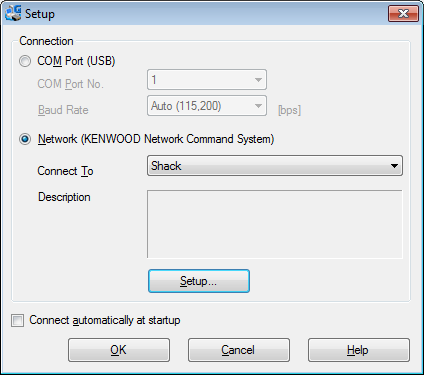 The ARVP-10R handles the audio – here I am connected to the Shack listening to the radio:

If it’s working, you’ll hear audio from the radio and see a screen similar to the one below.  It’s possible to use a cheap “Skype” headset and operate SSB “remote” by clicking the “Send” button to put the radio into PTT – some experimentation with audio levels may be required. 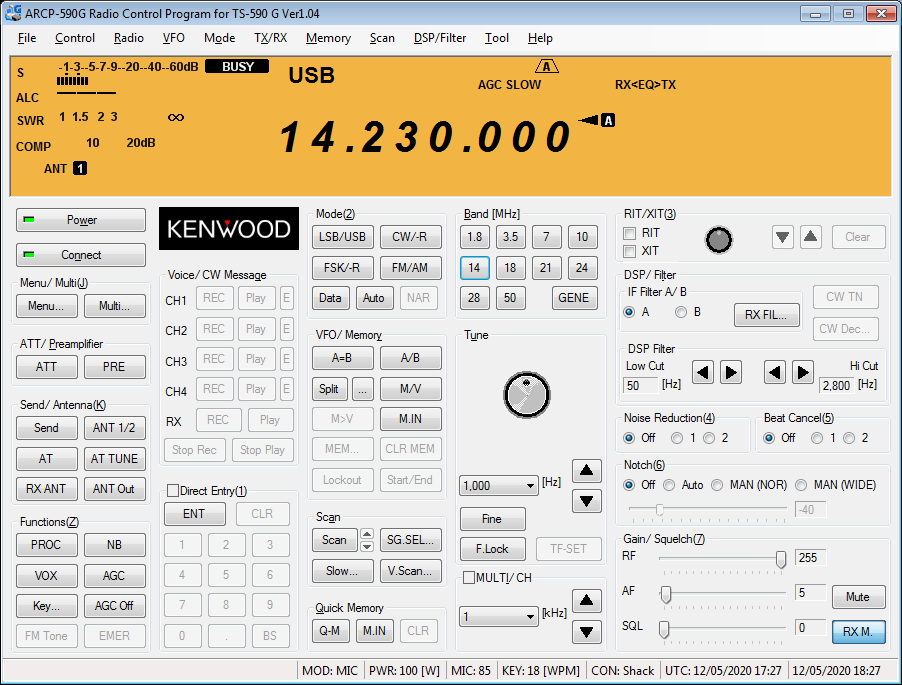 Additionally, you can open the CW Decoder+Keyer window making it easy to have quick CW QSOs via remote.  The audio delay over the LAN is around 300ms.  The mousewheel defaults to the Multi-CH knob which, on my radio, functions as a 1KHz tuning control.  You can left/right click the actual numbers on the display to step in larger/smaller values.

Whoever has an account gets full access to the radio, so care must be taken if you offer a login to somebody – If you don’t open a dedicated port on your router, this won’t be a problem.  Still, it would have been nice to be able to define an “SWL” user – where only the Tuning, Band and Filter settings can be changed with TX and critical menu settings locked-out.  I guess that’s why they invented webSDR.org

If you spend daft amounts of money on a radio, you may even find that it has an RJ45 port on the rear panel – no need to leave your Shack computer on.