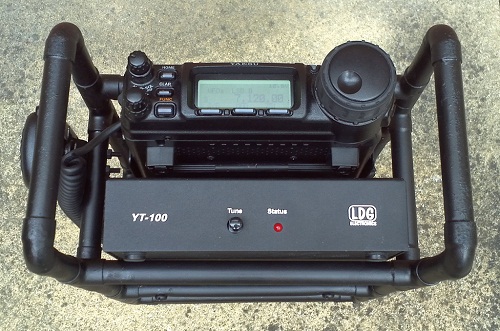 After seeing a variety of “Man-Packs” online, I decided to construct my own using the concept shown by Matt M0LMK and you can see the results of my efforts below…

The primary requirement was for the safe transport of my FT-857 along with the LDG ATU and a 7Ah/12Ah battery.

Other examples of “Go-Packs” include a 19″ rack case – ideal for those in a car or for an all-in-one emergency station.  At the time, my transport to /P locations was via bike – so the solution had to fit into my backpack and/or bike panniers.

Cutting the pipe was quite easy using a basic rotary pipe cutter.  Making sure that you have enough room inside the frame is definitely a case of measure twice cut once – and I didn’t make any detailed plans, preferring to make it up as I went along. 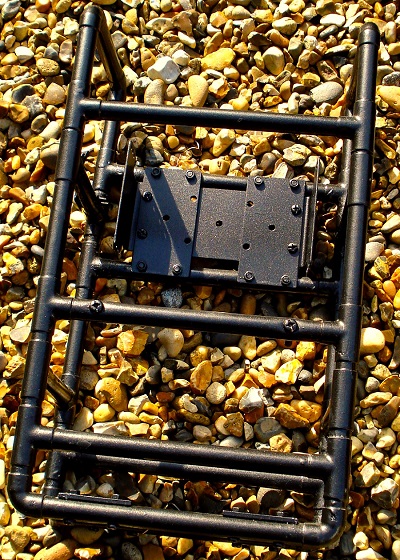 I opted for “clean” pipe fittings without the pre-soldered insides.  Although these are cheaper, it does require a bit more preparation of the solder joints later on.

Copper pipe solders with a blowtorch and garden variety solder, but you MUST ensure the pipes are very clean prior to this.

If you’ve ever tried to solder to a metal surface and seen the solder form into a ball and roll away – That’s what happens if your pipes are too shiny and aren’t fluxed properly.

This is one of those tasks that more about skill rather than reading how to do it – Much like soldering components to a PCB, you’ll know when it’s right.

Just let gravity do the work – Solder the joints that face upwards first, let the whole frame cool down (for around 15 minutes, – who knew that copper was such a good conductor of heat?!), then rotate and solder the rest.

Once it’s cooled-down you can give it clean in preparation for some paint or covering: Camo-tape is a popular choice if you don’t want to paint it. 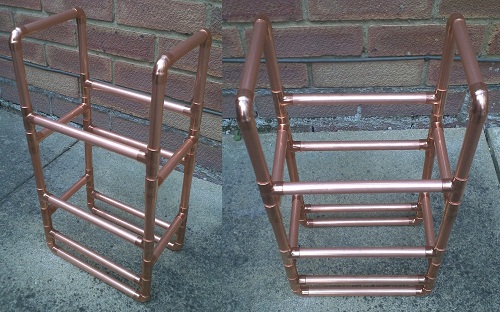 I’m pleased to say that it fits nicely into both my backpack and bike panniers – There’s room for the FT-857D, LDG YT-100 ATU and a 7Ah or 12Ah SLAB.  Parts used were 15mm copper water pipe – and it’s deceiving just how much of it you actually need.  I used just under 4m plus 8 elbow joints and 20 Tee sections.  That’s about £28 of bits if you’ve got the tools and other bits to hand.  The aluminium plates were a custom purchase (at £2ea) from Aerial Parts of Colchester. 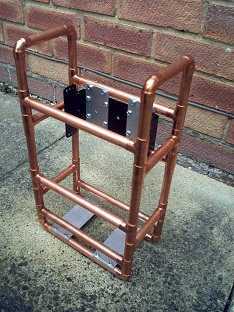 The overall dimensions are 230(w) x 400(h) x 150(d)mm.  The sections were placed to fit around my particular equipment but there’s no reason why you can’t use any other radio/ATU combo – In fact, any radio that has a mobile-mounting bracket will work.

Here it is, sprayed using black “stove paint” from the local DIY store – I could have cleaned the pipe better after soldering as the flux residue prevents the paint from adhering properly.  It’s possible to move the paint like it’s still wet – So, if you think you’ve scrubbed the pipe plenty, scrub it all over again just to be sure.  Still, for a first-go, it’s not ‘arf bad.  I’ve since given the frame another rub-down and applied 2 coats of Hammerite “Direct to Rust” (black, hammered) spray.

The LDG ATU rests on the rear feet of the FT-857 and against the front bar of the frame.  I add a piece of cloth between the ATU and bar during transport to prevent vibrations – The whole lot just about fits into the frame and the backpack!  A late-addition was a mic clip attached to the left-hand side – This was a junk-box item that I thought would be useful to have.

The display (on the picture at the top) isn’t as clear as it should be – I have to change the contrast level when using it outside of the Shack.  This depends upon whether you’re sitting in front of it or if it’s laying flat.  The display is clear, even in daylight – you just need to adjust the contrast accordingly. 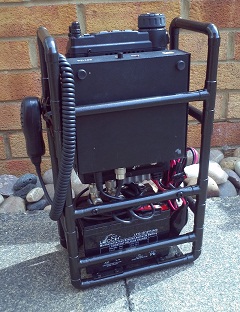