Operating data/digi modes can be fun – Often, a that elusive contact can only be made on a mode like CW or digital where the signal carries further than voice.  Some of the popular modes include FT8, PSK and RTTY which, in order to send/receive it, need you to connect your radio to the computer’s soundcard.  Modern radios offer a USB socket which includes CAT control plus an audio I/O device, so the hard work may have already been done for you.

However, if you’ve got an older radio, perhaps something “previously enjoyed” as your first dabble onto HF, you’ll find that most radios have a “data” connector at the rear – this is typically a 6pin mini-DIN socket (just like a PS/2 keyboard connector) and offers a fixed-level RX audio, TX audio and PTT – The advantage of using this connector is that you can then use the AF/volume control without affecting the audio going into your computer – Useful if you wish to decode something but not be distracted by the warbling tones!  If you wish to try receiving PSK (or RTTY, JT65 modes) without a special interface – you can try connecting the headphone output of the radio to your computer’s line-input.  Some careful adjustment of the volume on the radio and the line-in record level will be required.  If you set your line-input to “play through” via Control Panel, you can still monitor the radio via your PC speakers.

These interfaces can be used with modes like FT8, PSK, RTTY, JT65, SSTV, APRS and even to play/record audio (eg: contest voice-keyer) files.  A great deal can be learnt simply by listening to these modes: The sort of QSOs that take place, the wide range of people using it, not-to-mention the odd bit of DX that springs-up!  It can also serve as a quick way of trying PSK without too much setting-up and for RX-only, you can use the speaker output of of the radio for a quick and dirty way of getting it working.

Interfaces
One of the issues preventing homebrew construction is the lack of a real COM/serial port – The RTS pin can be switched “high” (+v) by your datamode software when it wants to transmit, and this in turn would switch a transistor or opto-coupler allowing the PTT line to connect to ground.  With USB commonplace, USB, you will either need to buy a ready-made USB interface or build the following interface and add a USB/Serial converter for about £5-15.

Some radios, such as the FT-450D, FT-857D, FT-897D, FT-950, TS-590SG offer a “Digi-VOX” mode allowing the radio to be keyed upon detecting audio coming into the data socket.  This makes the PTT interface somewhat easier – As simple as a 6pin mini-DIN to 2x 3.5mm plugs to your soundcard.  Some people completely omit the isolation transformers – YMMV. 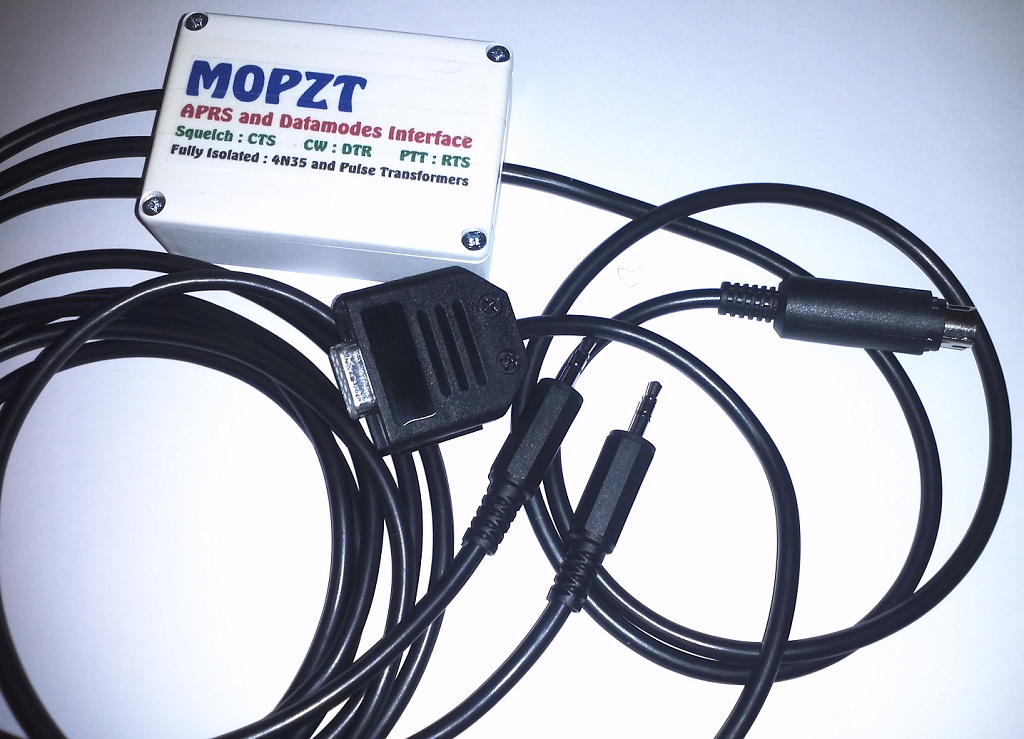 The unit pictured here was built in December 2015 for use with an FT-950.  Using a simple white ABS box from CPC and some 4-core+screen cable, it housed a pair of audio isolation transformers and 3 4N35 opto-couplers which fully isolated the radio from the computer.

Not shown in this picture is the CW hookup which plugs into the “Key” jack on my radio.  The 9pin D connector is a “real” serial port interface and the 2x 3.5mm plugs go to my soundcard.

There’s a 6pin mini-DIN for the back of the radio and the whole ensemble can be used in many modes such as PSK, RTTY, JT65, SSTV and even AX25/APRS via the AGW Packet Engine.

A word of caution if you’re planning to use the CD/CTS line for squelch/COS from the radio: On most Yaesus, this is usually +5v when the squelch is open (or valid CTCSS is detected) – If you connect this direct to your serial port, your radio’s speaker will most-likely mute.

My current radios (TS-590SG and IC-7300) both have built-in USB audio/keying interfaces making this type of external interface obsolete.

The circuit below was my original interface, built in 2009 and offers complete isolation between radio and PC – Parts are available from CPC  or Maplin.  A simple project box finishes-off the interface.  The circuit diagram below was originally drawn in 2006 and although my recent interface varies slightly, the basic concept is the same – There are many other examples of this circuit available online. 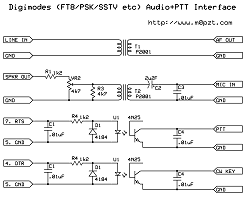 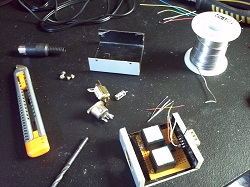 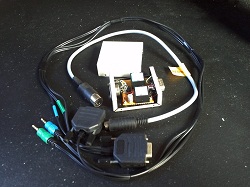 Even with modern USB computers, home-brewing this sort of circuit is still possible if you make use of a USB/Serial adapter – It creates a virtual COM port on your machine that many Ham Radio apps can use to control the PTT. Passive Interface
Back in April 2013 I built a very basic “passive” interface with no Opto/PTT control – The idea being that it would work with any radio that supports “Data VOX” – This includes a number of Yaesu radios (including my FT-857).  This allows you to get onto datamodes without having to worry about RS232/USB convertors and drivers.  The radio takes care of the PTT.

After completing this one, I added some blue+green electrical tape to each 3.5mm connector so they could be easily matched to the computer’s soundcard connectors.